“From mental clarity, to energy, stamina and productivity, food governs how well our bodies and brains function. Aspects such as water and hydration levels significantly regulate our  concentration and mental focus. A mere 2% reduction in hydration can reduce our concentration by…”

For years now we’ve been hearing about how we are eating ourselves into an early grave and condemning our children to mobility scooters before they turn 30. Food undeniably governs how well our bodies and brains function, but it’s about time we stopped relying on the assertions of esteemed academics like Dr. Gillian McKeith and thought about things a bit more intelligently.

From mental clarity, to energy, stamina and productivity, food governs how well our bodies and brains function. Food makes our mood. Water and hydration levels significantly regulate concentration and mental focus. A mere 2% reduction in hydration can reduce our concentration by between 10-25%. Whilst a lack of Omega 3 fish oils have been proven to inhibit growth of the social brain leading to increased chance of depression and an inability to read normal social cues such as tone of voice or facial expressions. This occurs as a result of an impairded development of magnocellular cells, which Omega 3 supports, argues Professor John Stein, emeritus professor of neuroscience and fellow of Magdalen College, Oxford.

Similarly, nutritionist and Times journalist, Amanda Ursell argues that studies in the work place show that a balanced diet can reduce absenteeism by 21% and increase productivity by 11%, happiness levels by 15% and stress management levels by 28%. Thus, a healthy diet will turn us into a super-human, inconceivably efficient, fully focussed work force that will eat its way out of the recession.

Well, not quite, but it’s still worth bearing these facts in mind. The thought of a balanced diet and healthy eating is often met by a groan and a rolling of the eyes because of its association with nutritional television programmes or lectures presented by people with the charisma of celery in a Tupperware box. It doesn’t have to be about strictly eating wholemeal and raw vegetables. (See similarly aged Nigella Lawson and Phd owner Gillian McKeith). 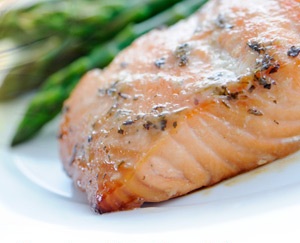 n particular, scientists have recently discovered that fat cells could make you happier. The hormone adiponectin, produced by fat cells to regulate metabolism, may have antidepressant properties. At the same time, it has also been discovered that eating fatty, fast foods can release a stomach hormone that causes you crave more and more of those Big Mac and Whopper meals. With these two in mind, it’s crucial to understand that obtaining the necessary fats for our diet should be done so via the right foods. Foods like oily fish, not a large McChicken Legend meal with a fizzy drink, large fries and a 99p Cadbury’s Dairy Milk McFlurry, no matter how good it may look on the advertisement board.

What is important, however, is to keep a diet that is well balanced, well considered and based around a proper understanding of how certain foods can inhibit or invigorate us. As nutrition director Europe at PepsiCo, Dr. Sue Gatenby reasons, “there’s nothing wrong with a fizzy drink or a savoury snack – they are part of a healthy balanced diet”. Take caffeine, for example, it has long been known to stimulate the mind and temporarily increase focus and there’s nothing wrong with that. However, adoption of the student style, exam time, 10 cans of Red Bull a day because caffeine = exam success, is seizure inducingly high. Likewise, that late night tiptoeing down the stairs for a few bites out of your partner’s poorly hidden chocolate bar need not make you feel so guilty (apart from the fact you’re a regular confectionary burglar). A healthy diet is a balanced one, one with the right mix of the healthy and not so healthy and so sometimes naughty can be good.

It’s also important to note that a healthy eating and living programme is not going to make an instant body shape difference. Consuming more Omega-3 rich oils, eating vitamin rich food and drinking more water won’t transform your body from Susan Boyle into Jennifer Lopez, neither will it give Wayne Rooney the IQ of Stephen Fry, but even a small change in sugar reduction and increased hydration will have immediate mental and well-being benefits.

For example, the experience of Richard Neal, a director from Lancing Press, who experienced a clear difference in his professional performance after transforming his lifestyle into a healthier one. His adoption of a low-fat, low sugar and low carbohydrate diet, combined with a personal trainer caused him to assert that he “went from being tired and listless and almost ready to retire to being full of energy and ideas, rejuvenated and looking forward to the next 40 years.”

Perhaps one of the most important things to remember is that nutritional profiles are unique and relate specifically to the individual. One man’s nutritional requirements are not necessarily applicable to another. However, in essence, the message is fairly simple. Food makes our mood. High carbohydrate diets washed down with fizzy, sugary drinks will facilitate minds that are slower, prone to making more mistakes, have a lower output and are less creative. Perhaps, it is time then, for us to not only consider our diet in terms of our personal health, but also our professional performance. And, in the long run, the future appears only bright for those adopting such changes.